Find this article at:
go.ncsu.edu/readext?539459
— Written By Shawn Banks

I received a call asking how to get rid of hundreds of cicada killer wasps. My first thought was, “why would you want to kill such wonderful creatures?”. I was then told the property owner was preparing to lay sod down in the yard and he wanted a safe place for the workers to do their job and get the sod laid. I’ve laid sod before, and it’s a tough enough job without having hundreds of wasps flying around your head while you’re putting the sod in place. 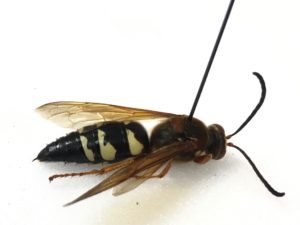 The cicada killer wasp or Sphecius speciosus performs a valuable task. It collects those noisy cicadas and uses them to provide their young with something to feed on while they go through the larval stage of life. This wasp is no little fellow. The female can be an inch and a half long and weigh about the same as an almond. She does have a stinger that she uses to paralyze the cicada before carrying it back to the nest where she drags it underground into a side chamber in the tunnel she has dug. There she will lay an egg on the cicada and then go for more. She must know the gender of each egg as she will need one cicada for each male egg and two cicadas for each female egg. Each female may dig up to four tunnels during her brief life. When digging the tunnel the wasp will remove up to a half a gallon of soil from below the surface. This amount of soil can kill the grass as the soil covers the lawn, preventing sunlight from reaching the grass blades.

The male cicada killer is a little smaller than the female only reaching about one inch in length. The male doesn’t have a stinger, but can be more aggressive keeping other males away from the nesting tunnel of the female he has mated with. He may also be aggressive toward people walking in the area. The lack of a stinger makes the male no less scary. After all, how are we to know which is a male and which is a female? 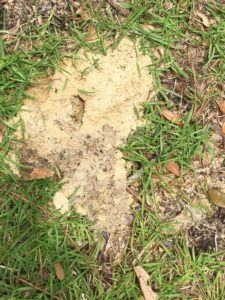 The adult wasps begin emerging from the ground around July 20 each year. They continue to emerge, building up numbers for about two to three weeks with the maximum number of wasps flying around being mid-August. The number of wasps flying around will decrease through the month of August until around mid-September when the last of the wasps has laid its last egg for the year and she dies.

So back to the original question of how to get rid of several hundred of these wasps. They like to dig the tunnels for their nests in areas of exposed soil. Keeping a thick, healthy turf is one way to discourage them from digging tunnels in a lawn area. In several of the publications I read dusts containing carbaryl or permethrins placed in and around the hole of the tunnels was suggested as a method of killing the female wasp. This will work, but it will also give the female the chance to provision a nest before being killed by the chemicals. As for killing hundreds, that will be difficult. There was no information I could find on how to control this many at one time. Aerial sprays might work, but it’s not likely that all of them will be contacted by the spray. Applying a lawn insect control product now may control some of the wasps as they dig out of their nesting tunnels and still more as they begin digging their own nesting tunnels. I couldn’t find any research to back this up, but the chemicals in these chemicals are the same as the ones in the dusts that are suggested for putting in and around the tunnels. 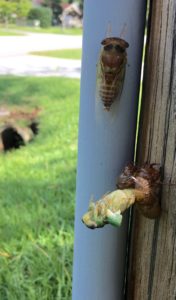 One adult and one emerging adult cicada.
By Shawn Banks

Be on the lookout for this wasp. Know that if you find them flying around your lawn, they are for the most part harmless. The females are more interested in gathering cicadas to feed their offspring than they are in chasing a few pesky humans away. Be warned though, they will sting if they feel threatened. Don’t pick them up and handle them or stand barefoot over a tunnel opening. A sting will hurt. Let them do what they were born to do and they will reduce the noise of the cicadas making it a little easier to enjoy a good night’s sleep.