Insects in the Garden

Find this article at:
go.ncsu.edu/readext?537502
— Written By Shawn Banks

I went out to the garden this morning to pick a few small tomatoes for a snack during work and found some visitors. Most were good but one was not so good. 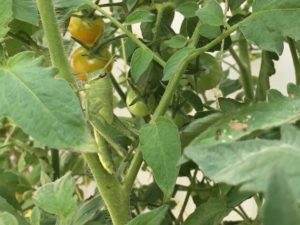 Grasshopper blending into a tomato plant. By Shawn Banks

The not so good insect was a green grasshopper. It was pretty large on the size scale, but still immature when it comes to the life cycle. A closer look at this visitor will show that the wings are not quite fully developed. This insect probably has one or two more stages of growth before being fully mature and ready to make baby grasshoppers. I was surprised to find a grasshopper on my tomato plant. I saw the little black droppings and was looking for a caterpillar, more specifically a tomato hornworm from the size of the droppings. Grasshoppers, like tomato hornworms, have mandibles and chew on the leaves of the plants. I found a little damage, but not much for the size of this hopper. 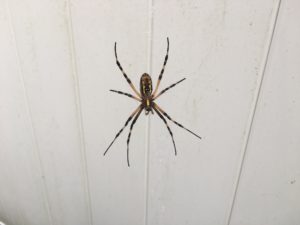 I found three good insects, well two insects and one arachnid as I was picking my tomatoes and examining the rest of the garden. The arachnid, a yellow and black writing spider (Argiope aurantia), is a rather large spider and quite obvious in the garden. Like Charlotte in Charlotte’s Web, it spins its web, but does a little writing to attract its prey. One thing I noticed about these spiders is that when I get too close to the web, they begin to shake the web. I’m not sure, but I think that is to make it easier to catch large prey. All the information or research I could find says they aren’t harmful to humans, but the sight of something big invading my garden and without my permission was a little nerve wracking. I got over it and moved on when I saw the next character on top of a basil plant right next to the tomato plants. 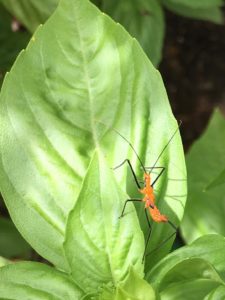 This red character is the nymph or immature stage of a milkweed assassin bug (Zelus longipies). This is a true bug not an insect that people call a bug. Being immature, this one doesn’t have wings yet. When it does it will have an “x” on its back due to the way it folds its wings over the back and the fact that half of the wing is thick and leathery while the other half is membranous and very thin. Hopefully I’ll see it again when its wings are fully developed. The red caught my attention, but the fact that it’s a predator is what amazes me. Assassin bugs sneak up on their prey and stab them with their long sharp proboscis. Once they have stabbed the prey, the suck the insides out until there is nothing left. When they are picked up and feel threatened, they will stick that sharp proboscis in whatever is threatening them. Believe me, it hurts. I’m glad these are on my side and not out hunting me. 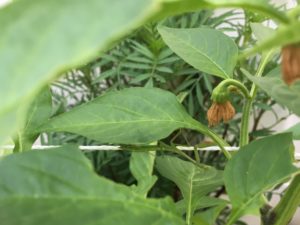 Preying Mantis hanging out under the leaves of a pepper plant. By Shawn Banks

The last one, I saw by accident. The praying mantis was on the underside of some pepper leaves. Again, it is early in the season and this insect is still kind of small and in the nymph stage. I can tell because it has no wings. It has the shape and color of a Carolina mantis (Stagmomantis carolina), but it could also be European mantis, although I’ve never really seen the European one in this area. It’s difficult to tell without bringing it into the office and going through a key. This insect has strong front legs that it uses to grab and hold onto its prey while it chews on them using its mandibles, just like the grasshopper with the leaves. I wouldn’t want one of these to think I was dinner. They are very docile when handled by humans, which makes them nice to keep as pets. I left this one in the garden to feed on grasshoppers, flies and mosquitoes.

All in all, it was a good visit to the garden. I found three friends and one foe. I think the odds are in my favor.