Due to COVID-19 concerns our building on the community college campus has been locked. If you need assistance, please call 252-222-6352.

Find this article at:
go.ncsu.edu/readext?656024
— Written By Shawn Banks and last updated by Dina Murray (1 month ago)

One of the most prolific weeds that are likely in your own yard is Florida Betony (Stachys floridana). Don’t let the pretty pink flowers fool you: Florida Betony Florida Betony will entrench itself and spread like its invasive cousins in the mint family. 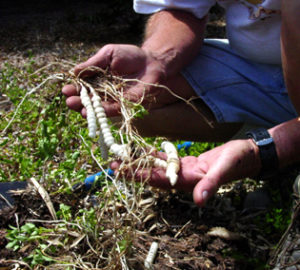 Tubers of Florida Betony that look like a rattlesnake, hence the name rattlesnake weed
Photo by UGA Extension

underground energy storage organ (tuber). See photo to understand how this weed got its nickname “rattlesnake root.”  If the leafy shoot is snatched off, the plant simply regrows from the tuber.

Florida Betony grows well in our cooler months of spring and fall (and mild winters). By March, it may be well-established. One method of control is to dig up (and dispose of) these weeds, spading up as much of the tuber as possible. Mulching helps, too, but it will still most likely re-emerge in the fall. According to the 2020 NC Agricultural Chemicals Manual, recommended chemical control includes herbicides containing one of the following 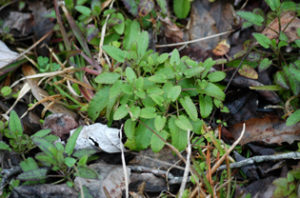 chemicals active ingredients: glyphosate, florasulam, or penoxsulam. Use only according to label directions. In turf, atrazine is also recommended for use in the fall; most turf grasses are unaffected by atrazine, with the exception of tall fescue.

After using chemical treatment, you may need to re-apply a month later to control this weed.