Our building remains closed however we are available to assist you. Please call us to make an appointment with an agent. Thank you!

Find this article at:
go.ncsu.edu/readext?675843
— Written By Shawn Banks (3 months ago) and last updated by Dina Murray

Large Patch Disease is caused by the fungus Rhizoctonia solani. This disease affects all our warm season grasses with Centipedegrass being the most affected, followed by St. Augustine and Zoysia with Bermudagrass being the least affected. The fungus that causes the disease is most active when the soil temperature is in the 70’s, but can be active at lower soil temperatures. 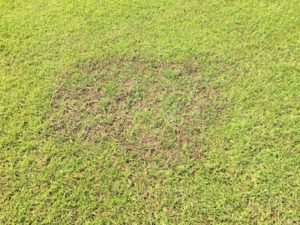 The symptoms of this disease include large circular patches in the lawn. Often times when the turfgrass is going into dormancy or coming out of dormancy and the fungus is most active, a red halo will be evident around the edges of the large dead patch of grass.

The fungus is most active in the fall as the turf is going dormant, however, most people don’t notice the damage until the grass is coming out of dormancy. Here are some steps that can be taken to control this disease:

Chemical control is best done in the fall after the soil temperature has dropped below 80 degrees. Repeat applications may be needed in severe cases.

This spring take pictures to make note of where the disease has caused damage in your lawn. The pictures will make it easier to know where fungicide applications might need to be applied in the fall.