We are working remotely due to inclement weather & building closure. Let us know if we can assist you via email or phone. Thank you!

Find this article at:
go.ncsu.edu/readext?825064
— Written By Shawn Banks and last updated by Dina Murray

About this time last year, I was browsing a local nursery and saw two plants that caught my eye. They were Heuchera, otherwise known as alumroot or coral bells, which I bought to plant in a large container on my front covered porch. The coral bells seemed like the perfect choice to brighten the upcoming winter days and they were beautiful all winter long. In the spring, I planted them in a shady corner of a raised bed. All was well until the end of July. Unfortunately, one of my coral bells was no longer in the shade so it became scorched, so much for the “right plant, right place”. Recently, I have moved my two coral bells along with a few new ones to a shady location in another part of the yard and so far so good. I also plan to plant a couple more in a container. 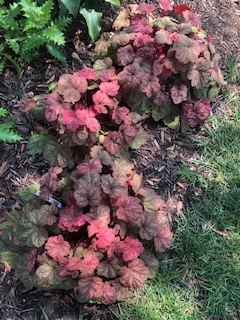 Coral bells are perennials and native to North America. They form round mounds and have woody crowns which should not be covered when planting. Plant them in the late fall or early spring in part shade. They prefer morning light and afternoon shade and they will most certainly get leaf scorch in too much sun. Water well during hot and dry periods but do not overwater or you may have problems with fungus. Mulch your coral bells with bark, pine straw, or shredded leaves.

There are many coral bell cultivars and a wide range of colors from which to choose. I purchased the Heucherella ‘Stoplight” which has bright green foliage with red center markings, and the Heuchera ‘Berry Smoothie’ which has purple-pink foliage. There are some heat tolerant coral bells including ‘Caramel’ which has peach foliage and ‘Citronel’ which has lime green foliage. Although coral bells are usually chosen for their foliage, many species have flowers that attract bees and butterflies. They bloom in the spring or early summer and their blooms are spikes with bell-shaped flowers. Heuchera works well as a ground cover or border. They also grow well in woodlands, rock gardens, and containers. With so many options, coral bells could be a great addition to your fall plantings. Enjoy!

If there is a particular plant that you have an issue with or need help identifying, visit North Carolina Cooperative Extension or call (252) 222-6352. 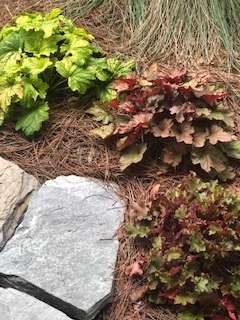 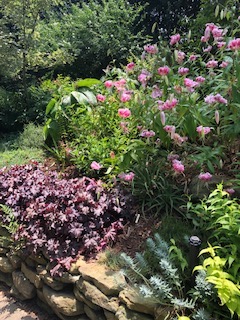