We are working remotely due to inclement weather & building closure. Let us know if we can assist you via email or phone. Thank you!

June Insects in the Garden

Find this article at:
go.ncsu.edu/readext?868634
— Written By Shawn Banks and last updated by Dina Murray

There are a whole host of insects that might be found on trees and shrubs at this time of the year. Not all of them are pests and need to be killed. For example, I noticed that one of my trees had a lot of black aphids feeding on the tips of almost every branch I looked at. A few days later, I took another look and noticed that many of the branches that had aphids on them a few days prior no longer had any at all. As I searched closer for a few branches that did have aphids, I found a mass of orange eggs belonging to a lady beetle. I also found some lady beetle larvae munching on some of the remaining aphids that were still hanging around. I didn’t have to spray and the aphid population was almost destroyed.

Lady beetles are a very beneficial insect that can be very helpful in controlling aphids, but if we spray the aphids, it may kill the lady beetle larvae as well. When this happens, the aphid population truly gets out of control.

Another beetle you might encounter during June is the Japanese beetle. At one point there were so many of them that they would completely devour a plant in a matter of days. Rose bushes were at great risk. Lately, I’ve only seen a few here and a few there. A soapy bucket of water and an early morning walk around the plants to knock the beetles into the soapy water and that problem will be reduced before it gets out of hand. 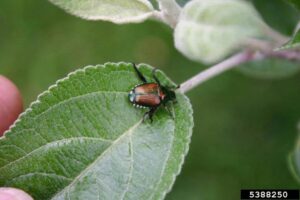 There are also a lot of different caterpillars that feed on trees and shrubs. Many of them turn into butterflies that we love to watch feeding on the flowers in the yard. Some turn into moths, but even some moths are pretty to look at. Sometimes it helps to know which pretty moth is associated with which devouring caterpillar.