Find this article at:
go.ncsu.edu/readext?620168
— Written By N.C. Cooperative Extension 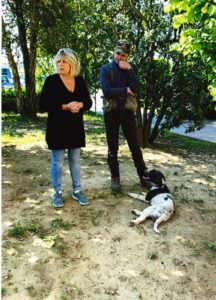 My husband and I were fortunate to travel to Italy in late April. We enrolled in Tuscana Saporita Cooking School near Lucca. After spending the morning of April 30 learning the basics of gnocchi, pizza dough, and fruit tarts, our nine-member class traveled to Savini Tartufi. The fourth generation Savini family sources truffles in the nearby woods and produces a wide range of truffle products. Our introduction to the truffle hunt began with the Italian truffle hunting dog. Their training begins at birth of each puppy destined for truffle hunting.

Now the time has arrived to bury the ball, similar to what happens when a truffle develops underground. The ball is now sliced open, and a piece of truffle is placed inside the ball. With no visual cue on the surface of the ground, the puppies sniff the field until finding the truffle odor emanating from below the surface. The puppies are encouraged to get the ball which results in digging. When the puppies find the truffle ball underground, they guard it until their trainer gives them a treat. Never once has the trainer introduced truffle eating to the dog. Rather, the dog has associated the truffle discovery with something it really wants: its mother’s milk, a kibble, and now a more sizable treat. The puppies never ingest the truffle.

All throughout training, the puppies are watched. The dogs with the most passion for truffle hunting will command the highest prices. We were not told the price of the dog for this afternoon’s truffle hunt. When someone in our group was bold enough to ask, the owner replied, “A lot of Euros.” 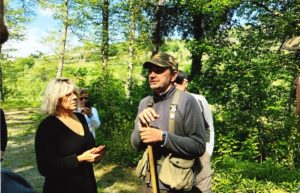 Sandra Rosy Lotti with Savini family member on tour in nearby woods during a truffle hunt.

After a short walk into the woods near Savini Tartufi, the dog was released from his leash. Immediately, he left the path and darted into the woods as we followed along. The dog’s trainer kept his eyes zeroed in on his dog, and he walked briskly to stay on the hunt. Almost immediately, the dog began digging. When the dog found a truffle, he kept his snout in the hole so no one could steal his truffle. Once the trainer pulled a treat from his pocket, the dog forgot about the truffle and devoured his snack.

And so, this went on for quite some time. Since it was the end of April, the Scorzone truffle was in season. This truffle can vary in size from a hazelnut to a hen’s egg. It smelled musty with a dark interior. There are six varieties of seasonal truffles harvested in Tuscany, and their aromas and values vary. All truffles command a high price, but the most prized truffle is found in winter. It is the Tartufo Bianco Pregiato or the precious white truffle. 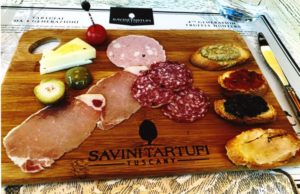 Charcuterie board with truffle infused food from Savini Tartufi.

After truffle hunting, we returned to Savini Tartufi for a delicious afternoon treat with truffle-infused items. Buon Appetito!